To share your memory on the wall of Bruce Anderson, sign in using one of the following options:

Provide comfort for the family of Bruce Anderson with a meaningful gesture of sympathy.

Born in Villanova, PA, Bruce grew up there, Locust Point, NJ, and ultimately the Pocono Mountains of PA, where he graduated from East Stroudsburg High School.

Bruce began his career in government intelligence service during World War II as a 17-year-old intern at the Office of Strategic Services, the precursor to the CIA. At age 18 he enlisted in the U.S. Army Air Corps, and served in the Pacific Theater until the end of the war.

Upon return to the U.S., Bruce began studying at George Washington University. He interrupted his education to join the newly-formed CIA. Bruce was assigned to one of the CIA’s first overseas teams, and was posted to blockaded Berlin, Germany during the Cold War. Bruce thereafter completed tours of duty behind the Iron Curtain in Warsaw, Prague and Budapest. After returning again to the U.S., Bruce was assigned to the highly successful CIA program operating the U-2 spy plane conducting operations over Soviet-bloc countries.

Bruce transitioned into the private sector in the late 1950s in Washington, D.C. to work as a public relations representative for Northwest Orient Airlines, and later Air France. Bruce maintained ad hoc ties with the CIA until he married Charlotte Milarcik and began a family.

An opportunity to be the director of advertising and public relations for the Alpha Portland Cement Company in Easton, PA brought his new family back to the Poconos. In 1967, Bruce accepted a position as special assistant to the Secretary of Highways (now PennDOT). Continuing in that field, he became a lobbyist for the Highway Users Federation. In that role he was awarded the Governor’s Award for Traffic Safety.

His family was the center of Bruce’s life. His lobbying job kept him away from home too much, so Bruce and Charlotte opened Anderson Travel Service in Stroudsburg in 1972. They grew Anderson Travel into an iconic and respected local business.

Bruce is pre-deceased by his older brother Bernard Ashley “Barney” Anderson, who was killed in air combat over France on April 20, 1944.

Bruce served his community as an active parishioner of St. Luke’s Roman Catholic Church in Stroudsburg. For many years he was a volunteer for the American Red Cross. Bruce also served as a member of the Stroud Township Planning Commission.

To send flowers in memory of Bruce I. Anderson, please visit our Heartfelt Sympathies Store.

Provide comfort for the family by sending flowers

We encourage you to share your most beloved memories of Bruce here, so that the family and other loved ones can always see it. You can upload cherished photographs, or share your favorite stories, and can even comment on those shared by others. 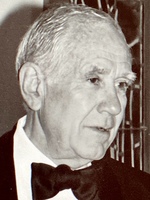