To share your memory on the wall of Margaret Fitton, sign in using one of the following options:

Provide comfort for the family of Margaret Fitton with a meaningful gesture of sympathy.

Margaret (Peg), born in NYC in1923, was a longtime, very involved, resident of LaBar Village, Stroudsburg PA. After a career as a nurse, she owned and operated a nursery school. But her joy was loving and raising her large family.

Margaret was predeceased by her loved and admired sister Theresa, her brother Bernard, her ‘sister-cousin’ Mary O’Brien and her eldest nephew John Tiernan.

In lieu of flowers Peg asked that you “take someone out to dinner”!
Or consider making a donation to St Lukes Parish.
Read Less

To send flowers to the family or plant a tree in memory of Margaret "Peg" Fitton, please visit our Heartfelt Sympathies Store.

We encourage you to share your most beloved memories of Margaret here, so that the family and other loved ones can always see it. You can upload cherished photographs, or share your favorite stories, and can even comment on those shared by others.

The Tiernan Family sent flowers to the family of Margaret "Peg" Fitton.
Show you care by sending flowers

Posted Mar 12, 2020 at 08:34am
Our heartfelt condolences to the entire McCabe family. May she Rest In Peace. With love, Chrissy & Ryan, Salvo & Marissa, and Romina & Gene & family

Flowers were purchased for the family of Margaret Fitton. Send Flowers

Posted Mar 11, 2020 at 04:32pm
With heartfelt condolences, Remembering a very special woman who meant so much to our family.

The Tiernan Family purchased flowers for the family of Margaret Fitton. Send Flowers 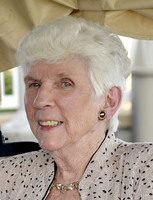